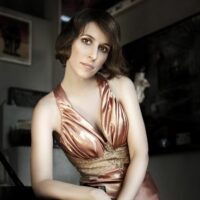 Nadejda Vlaeva is an award-winning pianist, who has performed throughout North America, Europe, and Asia, including at Carnegie Zankel Hall, the Rose Hall in Lincoln Center, the Oriental Arts Center in Shanghai, and The Concertgebouw in the Netherlands.
Nadejda Vlaeva is a Hyperion Recording Artist, and was the first pianist to record the complete Bach Transcriptions of Camille Saint-Saëns [“positively stunning,” BBC Music Magazine Instrumental CD of the Month]. The CD’s opening track inspired the award winning short animation movie “Ouverture” that premiered at the Lincoln Center Film Festival in New York.  Her Piano Music of Liszt CD won the Grand Prix “Liszt” du Disque, and her CD “Piano Music of Sergei Bortkiewicz” was a Musicweb Recording of the Year (“absolutely first class”).  Her newest CD, containing world-premiere recordings of works by the noted Bulgarian composer Pancho Vladigerov was included in Gramophone Magazine’s list of the best CDs of the year.
In addition to her internationally released CDs, Nadejda Vlaeva recorded soundtrack music for the documentary film “In Search of Cezanne” produced by Academy Award winner Allan Miller.  At the E.G. Conference she collaborated with BBC Planet Earth and also with the violinist Joshua Bell.  The American Composer Lowell Liebermann has dedicated two works to Nadejda Vlaeva, both of which were premiered by her.
Miss Vlaeva has composed several original works and arrangements, which are being published by Contemporary Composers Circle.
Nadejda Vlaeva was born in Sofia, Bulgaria and began playing the piano at age 5.  She has studied piano in Bulgaria, The Netherlands, and New York City.  She currently divides her time between New York City and Europe.