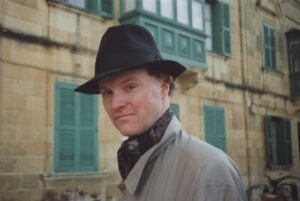 Kolja Lessing, one of the most versatile musicians of our time, has given decisive impetus to the music world by combining interpretational and research work with his skills as both violinist and pianist. Thanks to his efforts, for instance, Georg Philipp Telemann’s Violin Fantasias and Johann Paul Westhoff’s Violin Suites have been rediscovered for the concert stage along with many significant piano works by twentieth-century composers.
Internationally acclaimed CD recordings provide evidence of a varied approach to repertoire ranging from the Baroque era to the present day, encompassing both standard works and rarities. Kolja Lessing’s worldwide concert and recording activities as a violinist and pianist include collaboration with leading orchestras and conductors like Yakov Kreizberg, Nello Santi and Lothar Zagrosek as well as widely diverging chamber-music projects. In recognition of his efforts on behalf of ostracized composers he was awarded the Johann Wenzel Stamitz Special Prize in 1999, in 2008 he was awarded the German Critics’ Prize for Music. In 2010 the TV-documentary “Ferne Klänge” on his efforts for music in exile had its first broadcast. In 2015 he was honored with the Otto Hirsch Award by the city of Stuttgart. Numerous premieres of violin works which composers like Haim Alexander, Tzvi Avni, Abel Ehrlich, Jacqueline Fontyn, Berthold Goldschmidt, Ursula Mamlok, Dimitri Terzakis and Hans Vogt have written specially for Kolja Lessing reflect his international reputation along with the fact that he is regularly invited to give master classes in Europe and North America. Kolja Lessing received his seminal music training from his mother and later from Hansheinz Schneeberger in Basel, where he also studied composition. He also took artistic inspiration from his collaboration with Berthold Goldschmidt, Ignace Strasfogel and Zoltán Székely.