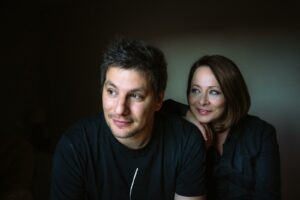 Ludmila Berlinskaya and Arthur Ancelle have developed a Franco-Russian piano duo symbolized by an unfaltering mutual understanding. They aspire, thanks to their complicity and cultural heritage, but also thanks to their energy on stage, their original repertoire, their unprecedented concert format, and their communication with the audience, to give to piano duos a status equal to other forms of chamber music.
In a short time, the duo has crafted a repertoire full of the « hits » for two pianos and four hands, as well as of rare works, exploring original compositions as much as new transcriptions, which have been enriched by Arthur Ancelle’s scores.
They’re also invited by orchestras such as the Musical Summits at Gstaad, the Tokyo Spring Festival, the Rota das Artes at Lisbon or the Lisztomanias. Bolstered by intense recording activity as a duo, as soloists, or as chamber musicians, Ludmila Berlinskaya and Arthur Ancelle released 6 albums together, all have been extremely well received by the international press. Melodiya artists since 2014, Ludmila Berlinskaya and  Arthur Ancelle have received multiple prizes and awards, such as the Editor’s Choice of Gramophone, the Choc of Classica, Album of the year by Le Monde, Album of the year by Libération, Pianiste Maestro, etc.
Their creativity and desire to contribute are also visible thanks to the artistic direction of two festivals: La Clé des Portes festival takes place within the magical surroundings of the Loire Castles since 2012, and the Rungis Piano-Piano Festival, entirely dedicated to the universe of 2-pianos and 4-hands.