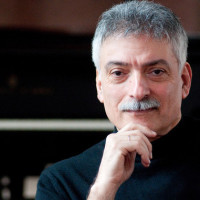 PETER FROUNDJIAN, born and raised in Berlin. Studies at the University of Music (HdK) Berlin with Gerhard Puchelt among others. Received further valuable artistic impulses from the Schnabel and Galston pupil and later music writer Walther Kaempfer. Piano lecturer at the HdK / UdK and church music school in Spandau for several years; In 1987 he founded the festival “Rarities of Piano Music”, whose artistic director he has been since. At the same time, he is responsible for the festival CD edition of the series at “Danacord”. His pianistic activities are reflected in radio recordings and concerts with works by u.a. Liszt, Koechlin, Korngold, Szymanowski, Friedman, Scandinavian piano music, Rued Langgaard and in the recording of CDs with numerous first recordings of works by Ignaz Friedman (on “Etcetera”) and Rued Langgaards (on “Danacord”). As a song accompanist, he campaigned several times for the pianistically demanding songs by Joseph Marx and Rued Langgaard. Not least because of his successful piano pedagogical work at the district music school in North Friesia, he was invited several times as a juror to national (national competition “Jugend musiziert”) and international piano competitions (e.g. Clara Haskil and C. Bechstein). His most recent CD recording “Christmas Piano Music” was released by Sony in 2017 – according to “Rondo” (12/2017) a “discographic sensation”..