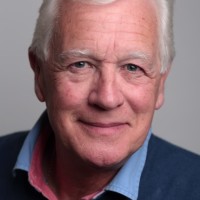 JEREMY NICHOLAS is an actor, writer and musician, the author of four reference books on classical music, and biographies of Chopin and Leopold Godowsky. He is a respected authority on pianists and the piano, and is currently a regular contributor to Gramophone and International Piano magazines as feature writer and critic. A new CD ‘Homage to Godowsky’ (Hyperion) played by Andrey Gugnin was conceived and curated by him. He has composed the music for several stage plays and four major television productions. Some of the 150 songs he wrote for BBC radio’s Stop the Week are published by Novello and have been recorded by the likes of Sarah Walker, Roger Vignoles and Marc-André Hamelin. Organist Kevin Bowyer and the Grimethorpe Colliery band are among those who have recorded his instrumental music. Earlier in his career, his solo performance of Jerome K. Jerome’s Three Men in a Boat in his own adaptation won him an Olivier Award nomination, while on television he played many leading roles in drama series and soaps. A well-known voice on BBC radio, in 1996 he won a coveted Sony Gold Award for Best Arts Programme. In his spare time, he is President of the Jerome K. Jerome Society and organist of St. Mary’s, Bocking, in Essex where he makes his home.

2020 marks the 150th birthday of Leopold Godowsky (1870-1938), one of the greatest pianists of the last century and a composer of whom his friend Rachmaninov wrote in 1934: ‘Godowsky is the only musician of this age who has given a lasting, a real contribution to the development of piano music.’ Thirty years ago, he was a forgotten figure. Little of his music had been recorded and even less was played in concert; almost none of his music was in print. In the three decades since the publication in 1989 of Jeremy Nicholas’s biography Godowsky – The Pianists’ Pianist and thanks to the committed advocacy of such pianists as Marc-André Hamelin and Carlo Grante, the music of Leopold Godowsky is now part of the standard repertoire. All of it has been recorded – some of it many times over – and is now easily accessed. In addition, all of Godowsky’s own recordings have twice been issued on compact disc. In his talk (illustrated by audio clips), Jeremy Nicholas reveals how his biography impacted on his own career and, in the process, paints a portrait of Godowsky’s life and music. “We are all woodchoppers compared with him.” (Vladimir de Pachmann).