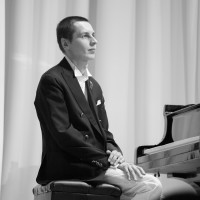 ALEXANDRE BRAGER was born 1976. He started studying music at six. In 1987 he entered Kazan boarding school to the class of Kira Shashkina. In 1992 he continued at Central Music School (CMS) in Moscow, where he graduated in 1994. and then matriculated at the Moscow Tchaikovsky Conservatory as a disciple of famous Russian artist, prof. Naum Starkman. After graduating from the conservatory in 1999, he became a post-graduate student at the Faculty of Historical and Modern Performing Arts, where he continued to refine his art with prof. Yuri Martynov.

After finishing the post-graduate studentship in 2001 he, by a twist of fate, founds himself in Ivanovka, a memorial estate of S. Rachmaninoff, where he stays for about a year as a research fellow. From 2002 till present Brager works at the Moscow Conservatory (at the Faculty of Historical and Modern Performing Arts), and starting from the season 2005–2006 holds a job at the Vl. Mayakovsky Moscow Academic Theater. He participated in production and recording of music tracks for various theatrical and radio plays.

Not only A. Brager is at home with the classic-romantic repertoire, he seamlessly strides to the genre of vintage variety. Having reconstructed by ear the piano parts of many charming “ariettes” of A. Vertinsky, he successfully accompanies V. Lensky (artist at the Vl. Mayakovsky Theater) with them. Overall, Brager is open to a multifaceted range of interests. For example he professionally shoots and edits video. In 2015 WERGO (Germany) published a concert film “The precise music of Galina Ustvolskaya” (prod. Alexei Lubimov), where Alexandre, surprisingly, took on roles of cameraman, cutter, audio producer, and graphics designer.

A participant of musical festivals in Russia and abroad as well as different literary-musical projects with leading drama artists, Brager — besides concert engagements — devotes a fair share of time to recording. Under “Art Service” label, he issued four solo albums: “The Sound of Time”, “Remakes & Variations”, “History’s Carnival”, and “Kreisleriana”. Brager is the author of a number of piano transcriptions and several original works.